In 1961, Blake was sentenced to forty-two years imprisonment – at the time, the longest sentence in modern British history. He had betrayed all the western spying operations that he knew about to the KGB. This included the names of hundreds of British agents working around the world. About forty of them are believed to have been executed. Blake is reckoned to have done as much damage to British interests as did his Moscow companions Kim Philby and Donald Maclean – perhaps more.

Today, his story is known only to a few experts, and only insofar as anything can be known for certain in the world of deceit that is spying. MI6 has never made its files on him public. Now that the master spy has died, Simon Kuper finally sets the story straight. He unravels who Blake truly was through a combination of personal interviews, research in many languages, and use of almost unseen Stasi archives. His illuminating biography tracks Blake from his beginnings as a teenage courier for the Dutch underground during the Second World War, to his sensational prison-break from Wormwood Scrubs, to his tranquil old age in a dacha outside Moscow, where Kuper caught up with and interviewed him.

Simon Kuper is a British author and columnist for the Financial Times. He has written for the Times, Observer, Guardian, Le Monde, Spiegel, the New York Review of Books and the Spectator, and writes regularly for the New Statesman and the Dutch press. His previous books include Soccernomics, The Football Men, Football Against the Enemy and Ajax, The Dutch, The War. He lives in Paris.

Kuper says: ‘I went to see him in his dacha in May 2012, expecting just to write an article for a Dutch newspaper. I left several hours later thinking, “This is the most interesting interview I have ever done.” Blake’s life tracks so much of the twentieth century: fighting in the Dutch Resistance, working for the British secret services in World War Two, captivity in North Korea, spying for the KGB, prison in London, an escape so spectacular that Hitchcock spent his last years trying to make a film about it, and then living in Moscow with the reality of communism alongside Kim Philby and Blake’s soulmate, Donald Maclean. No wonder he fascinated John Le Carré. I spent years researching Blake. He charmed and revolted me. I have wrestled with that ambivalence in this book.’

And it's now out in the US - all the details and how to buy it here: https://thenewpress.com/books/spies-lies-exile 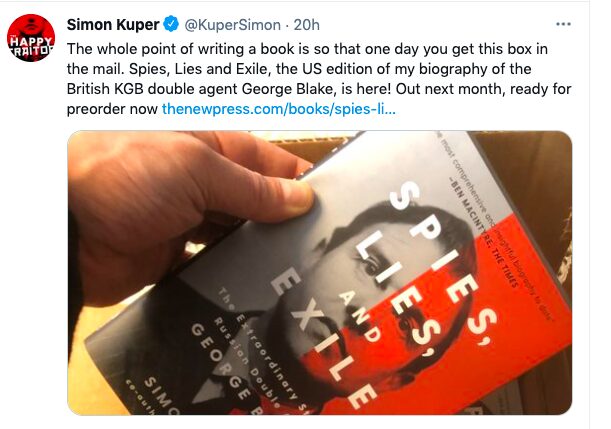